The experts at Citadel Roofing & Solar have long been bullish about the potential of solar roofing products like shingles and tiles. But the reality is, the price for homeowners and business owners to install solar roofs just hasn’t come down enough to warrant installation for most people.

Still, we know some consumers want to know more about the technology. So here is the lowdown on how solar roofing products work and how they stack up against traditional solar electric panels.

The main solar roofing products available today are solar shingles and solar tiles. Both products integrate with traditional roofs as opposed to solar panels which clearly sit atop the roof. Solar shingles are much thinner than solar panels so many people think they blend into the roof better.

Both are sometimes referred to as building-integrated photovoltaics (BIPV) or Roof Integrated PV (RIPV), which we mention only because you may come across the term while learning about solar shingles.

The History of Solar Shingles & Tiles

Atlantis Sunslate solar tiles were the first BIPV product in the United States back in the late 1990s, and the first solar tiles became commercially available back in 2005. Since then, companies such as Open Energy, Sharp, Kyocera, SunPower and BP Solar introduced products for commercial and residential applications that had limited success for various reasons. Products available today include Certainteed’s Apollo, Suntegra, Tesla SolarRoof and GAF’s DecoTech.

Solar shingles and tiles are of course much smaller than traditional solar panels, which run roughly 3.5’ x 5.5’ for residential installations. Solar shingles typically measure about 1’ x 6’.

But while the packaging differs, it’s the same basic technology inside.

When sunlight hits the solar cells in the panel, shingle or tile, a semiconducting material such as silicon converts the light into electricity, which is sent into the home or business for your use. It’s that simple.

Here’s how solar panels stack us against solar shingles or tiles in a head-to-head comparison of features.

You may have noticed we didn’t say which type of system is easier and faster to install. If the comparison is between installing a solar shingle roof or a traditional solar energy system with solar panels, today the panels are far faster to install.

More important is to take care when choosing your installer. Solar shingles and tiles are attached directly to the roof “deck” like traditional shingles or tiles. This entails making many roof penetrations. And solar panels rest on hardware affixed directly to your roof’s surface. So both processes have the potential to compromise your home’s integrity.

Roof damage caused by solar installation crews is far too common. Whether you choose panels or solar shingles, you want a safe, neat, uniform-looking design when all is said and done. Choose a contractor who knows both solar and roofing so you can rest easy.

The team at Citadel Roofing & Solar has a lot of experience with solar shingles and tiles. Some years ago, solar tiles were the product of choice for homebuilders incorporating solar energy into their new construction. In fact, between 2006 and 2011, Citadel team members installed thousands of solar tile roofs in California. And our Executive VP of Solar helped Dow Chemical bring its solar shingle product to market some years ago. 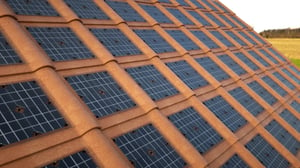 We remain optimistic about solar shingle and solar tile technology, but cautious about claiming the products are ready for prime time. We are encouraged by the innovation that we are seeing from companies such as Tesla and GAF. In our opinion they still have a ways to go, due to price and other factors. But we are monitoring the situation closely and will be among the first to offer solar roofs when the time is right.

Meanwhile, for the foreseeable future, solar panels will continue to be the go-to product for Californians looking to lower their electric bills with an easy-to-install, reliable and cost-effective product.