Residential solar energy is going gangbusters in California, but still there are homeowners who believe the myths and misperceptions about the technology and its impact on your finances. Some of the myths are propagated by anti-solar factions like oil and gas companies and utilities, because they want to slow solar adoption out of fear their products will be less in demand as solar becomes more popular.

Citadel Roofing & Solar has installed solar energy systems for thousands of people throughout California, so we’re well aware of these myths and the truths they obscure. Allow us to give you the straight scoop on nine common solar myths:

The precise cost depends on a number of factors, including the equipment used, the size of the system, and your electricity needs, but yes, homeowners can expect to pay thousands of dollars for their residential solar system. However, you have to put it in context. Your solar saves you money on your electric bills for decades. Over time, those savings add up to a significantly greater amount than what you paid for the system. So, while you have to wait a while, the system pays for itself completely – many times over.

If you spend $10,000 on a used car, you never get that money back. If you spend $10,000 on a solar energy system, you do get it back! (And you help combat climate change. And you have backup power during outages if you also install solar energy storage.) So, is the term “expensive” even relevant here? We don’t think so, not when there are No Money Down loans that allow you to benefit from solar right away without any expenditure on your part. 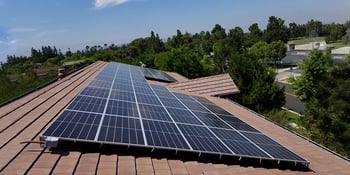 Plus, the federal Incentive Tax Credit covers 26 percent of the system’s price, (paid in conjunction with your income tax return).

Again, some context is helpful: A new car, a new washing machine, a new kitchen—those things never pay for themselves. In fact, it’s common knowledge that a new car loses 20 percent of its value in the first year. Isn’t getting paid back for your solar over the course of some years a great deal compared to a purchase that doesn’t pay you back anything at all? We think so.

And solar’s payback period has shortened dramatically in the past 15 years as solar costs have dropped. It used to take 18-20 years for solar owners to recoup their investment; today, it’s well below 10 years in most cases.

Myth #3: I Have to Pay Cash to Make Solar Economical

It’s true that paying cash for solar gets you the fastest payoff and the highest value over the years. Cash has always been king.

But solar loans, requiring no money down, often have an equally compelling scenario: Your monthly solar loan payment plus your lower monthly electric bill payment often total less than what you would have paid the utility for electricity had you not installed solar. You’re reading that right. You can have solar installed on your home, pay nothing out of pocket, own the system, and reduce your electricity costs from day one.

Myth #4: I Should Wait for the Next Generation of Solar Panels

Solar panel “efficiency” continues to improve, meaning newer panels produce more energy per square foot of panel. But technological advances are incremental at this stage in the market’s development. It’s not like you’ll double your money or cut your payback period in half by waiting a few years.

Since a solar energy system pays for itself in a matter of years and today’s prices more than justify the investment, why not start making your own reliable power and saving on your electric bills now? When that system is paid for, you can always upgrade to the latest technology or you can continue to collect the savings from your existing system.

It’s a bit like deciding if you want to trade in your five-year-old car for a newer model or stick with the existing vehicle. Both options are fine.

Myth #5: I Should Wait for Solar Shingles

Solar shingle products have been around for some years now, yet you don’t see many of them installed on houses. There’s a reason for that. The manufacturers haven’t quite perfected the technology and a pricing model that make shingles economical and a good investment for homeowners.

We at Citadel are fans of the concept too, and when the economics of solar shingles make sense, we’ll be ready to install them.

In the meantime, we don’t advise waiting to save with solar until shingles have evolved because there’s no telling how many years that will take.

Myth #6: I Need a South-facing Roof to Go Solar

In general, solar energy panels installed on south-facing roofs collect the most sunlight over the course of the year, which gives you the highest production. That’s true for any location in the northern hemisphere. But panels facing east and west also work great and solar on those roofs can be very cost-effective.

More important than orientation is how many obstacles your roof has, like dormers, skylights and chimneys, which cut into the space available for the solar system and may cast shadows on the panels.

On a related point, while relatively steep roofs are optimal for solar production, lower-pitched roofs can also work very well. In fact, roof direction matters less with flatter roofs because it’s easier for sunlight to “reach over” the roof’s peak and hit the panels.

Myth #7: I Shouldn’t Go Solar if I’m Planning to Sell My Home Soon

Numerous national studies by reputable organizations like Zillow, Lawrence Berkeley Laboratories and the Appraisal Institute have proven that solar energy systems increase residential property values and decrease re-sale time, if you own the system. It makes sense. Wouldn’t you like to buy a home that comes with a super-low electric bill? Read more about the studies and how much they say solar adds to home values in our blog post How Solar Increases California Property Values.

Here’s how the finances work if you sell your house with solar on it:

Their (faulty) argument is that the utilities need a certain amount of money from their customers to pay for the electrical grid’s operation and maintenance. If people who go solar are paying the utilities less than before, than the utilities have to raise rates for everyone else to make up the lost income.

The problem with that argument is that it’s just not true. The Lawrence Berkeley National Laboratory studied if and how solar was shifting costs between solar and non-solar utility customers. They found that the effects of solar on retail electricity prices is and should remain negligible. The report says it’s actually utility capital expenditures (in things like power plants and transmission lines) that will have the greatest impact on electricity prices.

PV Magazine offers this perspective on the debate:

"The 'cost shift' from solar system owners to other utility customers is one of the most widely propagated myths around PV. And despite this obfuscation being repeatedly disproven by many studies, it remains widely propagated by utilities and either poorly informed or outright captured politicians and regulators.”

Here’s a summary of the report if you’re interested: Putting the Potential Rate Impacts of Distributed Solar into Context and the full 51-page report.

Having solar installed on your roof absolutely should not damage your roof.

However, far too often, the experts at Citadel Roofing & Solar have seen homes with damage caused by careless or poorly trained solar crews. Thankfully, those cases are still the exception, which is why tens of thousands of homeowners are enjoying solar savings and environmental benefits with more going solar every day.

Protect yourself against roof damage by choosing a solar installation company that has:

Roofing contractors have more experience than any other contractors when it comes to working on and protecting roofs, so strongly consider a company that offers both roofing and solar services, like Citadel.

Learn more about how roofing and solar impact each other in our blog posts on How Roof and Solar Warranties Impact Each Other and Understanding Common Solar Installation Problems.