The Electrification of California Homes: A Glimpse into the Future

A trend is rippling across California, affecting buyers of newly constructed homes in roughly 20 cities and towns already. In the near future, this trend is expected to affect most of the state (and beyond), and eventually it may well affect existing homes that are undergoing renovation.

Cities and towns are banning natural gas appliances in new homes, or encouraging electric appliances and all-electric homes, as a way to combat the devastating impacts of climate change. Local government leaders are accomplishing this shift through changes to their building codes, which affect all new homes built in their communities.

Not all of these new mandates are popular; Berkeley and Windsor are being sued by various parties claiming their natural gas bans are illegal or harmful for a variety of reasons. But the change is already in effect in many other cities and towns, including Davis (where Citadel has an office).

The City of Davis wisely sidestepped any potential backlash and avoided the controversy of a ban by encouraging all-electric homes instead of banning gas. It also offers builders the alternative of equipping new homes with gas service but wiring them to be all-electric in the future.

What does this mean to consumers? All-electric homes are coming fast!

Read on to learn how this change might affect you. And if you’re a chef or cook who shudders at the thought of replacing your gas stove with an electric one, we address your concerns at the end of this article.

Readers of a certain age will remember the days when the thought of an all-electric home was horrifying. Electric baseboard heat, in particular, was inefficient and extremely expensive. Monthly electric bills of $500 to $1,000 were not uncommon, making natural gas- and oil-fueled furnaces look good by comparison. And while the electricity-powered heat itself was emissions-free, the electricity was produced by the utility’s fossil fuel plants, so the environmental gain was questionable while the pocketbook impact was substantial.

Thankfully, times have changed, so these all-electric building code changes will have minimal impact on new homebuyers’ quality of life. The advent of solar electric systems, solar energy storage systems, and energy-efficient residential heating and cooling systems are all contributing to today’s comfortable and clean homes that feature all the conveniences we homeowners have come to expect.

These four technologies in particular are game-changers, re-shaping the American home as we know it:

These systems are affordable thanks to price reductions in recent years, and the technologies are advanced and high-performance. (They have become critical components of “net zero” or “zero energy” homes, which generate as much energy as they consume.)

1.Air-Source Heat Pumps: Heat pump systems are an extremely energy-efficient way to heat and cool your home. They work particularly well in moderate climates such as California’s.


The U.S. Department of Energy (DOE) offers this explanation of how heat pumps work: (We know the first sentence sounds counter-intuitive but trust us, it works.)

Air-source heat pumps come in several variations, including mini-splits which are designed for homes that don’t have duct systems in place. These powerful and compact systems have a side benefit, too: They dehumidify the air better than traditional central air conditioning.

2.Heat Pump Water Heaters: Like air-source heat pumps, heat pump water heaters move heat rather than make heat. They are much more efficient than conventional water heaters. These systems operate like your refrigerator in reverse. Ever notice the warm air coming out of the bottom of your fridge? That’s where the appliance expels warm air, thereby cooling the air inside it.

Let’s turn to the DOE again for an explanation of how a heat pump water heater works:

“While a refrigerator pulls heat from inside a box and dumps it into the surrounding room, a stand-alone air-source heat pump water heater pulls heat from the surrounding air and dumps it -- at a higher temperature -- into a tank to heat water. You can purchase a stand-alone heat pump water heating system as an integrated unit with a built-in water storage tank and back-up resistance heating elements. You can also retrofit a heat pump to work with an existing conventional storage water heater.”

3.Solar Electric Systems: The two systems we just discussed are efficient in how they operate, using much less energy than their traditional counterparts. Therefore, they cost less to operate, and are good for the planet. But they still require electricity and as all Californians know, utility electricity is expensive. And the price only seems to go up.

That’s where solar energy comes in. Solar is the workhorse in all-electric homes. It’s a key technology that helps make all-electric (and net-zero) homes feasible and cost-effective. It will power your heat pumps and your home while saving you a significant amount on your electric bills.

Of course, a solar electricity system only feeds electricity into your home when it’s sunny enough for the panels to generate energy. That’s where solar energy storage comes in.

Storage can save homeowners even more money on their electric bills than what they’re already saving by utilizing their own clean energy. Solar owners on the utility’s variable “time of use” rates can replace the utility’s most expensive power with their own stored solar electricity during “peak hours” which are usually late afternoons.

But in these wildfire-ravaged times, electricity cost savings have actually become secondary for many homeowners who install storage systems. Increasingly, people install storage so they can draw from their stored power and have some electricity in their homes during utility outages. That includes the planned outages that utilities including Pacific Gas & Electric (PG&E) have been enforcing during times of high wildfire risk, to reduce the likelihood of their equipment sparking a blaze.

Read more about the benefits of storage in our blog post, Beginner’s Guide to Solar Energy Storage Systems.

Or call the experts at Citadel Roofing & Solar at (800) 400-2852 and we’ll explain how our Solar+Storage package can protect your home.

Homeowners generally are fine switching to electricity-powered heating and cooling systems as long as those systems work well and are cost-effective, which they are in spades these days. Electric clothes dryers aren’t a big deal. And adding solar panels to your roof is considered practical and progressive. But ask some people to change from a gas-fired to electric stove, and watch out.

It’s true that compared to older electric ranges and stoves, gas provided faster heat adjustment and more precise control over the level of heat. But with today’s improved models, electric stoves outperform gas ones in many categories, according to Consumer Reports. Electric stoves boil water faster and simmer better while the oven broils better. Gas, however, remains better for baking. 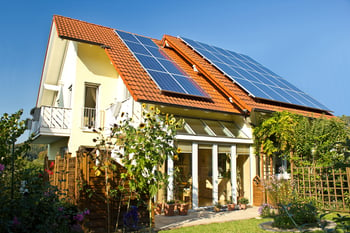 Back to the topic of this post, let’s talk energy efficiency. According to Bob Vila, host of TV shows including “This Old House” for 30 years, a gas stove transfers 40% of the heat generated to the food, versus 74% with an electric stove. An electric induction stove wins the prize, though, transferring up to 90% of its energy to the food being cooked.

The price of an induction stove is higher than traditional electric, but prices are dropping, and your cast iron, enameled cast iron and stainless steel pots and pans are induction-compatible. For the chef who seeks the precise control and cooking speed of gas in his or her all-electric home, induction may be the answer.

Make a Change in Your Home

Advances in clean energy technologies, dramatic reductions in costs, and the recognition by government leaders that homes can be all-electric without sacrificing creature comforts or breaking the bank, are making the shift away from fossil fuels realistic.

As a result, we are witnessing the beginning of an all-electric revolution, which will spread first to homes throughout California, and then to other states. It will spread from residential to commercial buildings. And it will spread to buildings being retrofitted, not just those being newly built. It will happen; it’s just a question of how fast.

There’s no need to wait for the revolution to come to you. Make the move toward a cleaner home that uses less of your hard-earned money by looking into any of these technologies today. If you’re interested in learning what solar, storage, or the Solar+Storage combo can do to improve your quality of life, get in touch with Citadel Roofing & Solar.