Since hot, dry and windy weather is a given in California, it’s safe to assume these rolling blackouts will be implemented again, and that solar energy storage systems will become more valuable and popular as a result.

Despite their growing popularity, energy storage systems are still fairly new, so you may not be clear on what exactly they do or how they work. Here’s what you need to know.

What exactly is “solar energy storage”?

For starters, let’s address the name. As is typical with new products, the battery industry hasn’t settled on one word or phrase to describe this product. You’ll see and hear it called many things, including: solar storage, battery backup, home energy storage, battery storage, etc.

These all refer to compact systems that allow homeowners to store the solar electricity they produce for later use. We like to call them solar energy storage systems, since that best explains what they do.

In the case of the LG Chem Resu 10H, the first battery offering from Citadel Roofing & Solar, the main component of the system is a lithium ion battery. Lithium ion batteries, as you may know, are rechargeable batteries used in everything from small portable electronics to electric vehicles to industrial-scale applications.

What will a solar energy storage system do for me?

These systems offer two main benefits for solar energy system owners. With both, you store your extra energy in the batteries for later use. So, for example, if you are producing a lot of solar electricity during the day but not using much of that electricity because you’re at work, your battery can hold some or all of that excess. (Without a battery, your unused solar electricity goes into the utility grid where it is used by others. You receive “credit” for that power through the “Net Metering” program.)

This animation from EnergySage shows a common scenario: During the day, your unused solar energy flows into the battery where it is stored. At night, the stored energy flows from the battery back into your home when you need it (as does additional electricity from the utility grid, if needed.

The solar energy stored in your battery can be used in two ways:

1) Providing part of your home with some electricity during a power outage, including forced outages or rolling blackouts implemented by the utilities to help prevent wildfires

2) Using the power during expensive times of day, which the utilities call peak demand. By shifting when you use your solar, you can offset the more expensive hours and reduce your electric bills. (Keep reading for more on Time of Use (TOU) electricity rates.)

Do I have to install it in conjunction with a solar panel system?

No, although there are benefits to installing them at the same time.

Combining new roof and solar projects under one installer has always delivered benefits such as cost-efficiencies and a unified warranty. Similarly, combining a solar energy system with solar storage also reduces your installation cost compared to installing the two products separately.

Regardless of whether you install storage at the same time as solar panels or later, your storage system is eligible for the 30% federal solar tax credit on solar, as long as you charge the battery using solar (or renewable) energy. (Note that the tax credit drops to 26% on January 1, 2020.)

How big is a home energy storage system?

Where does this battery system go?

Typically, it is installed in a garage or basement next to the solar energy system’s inverter or other equipment. It can sometimes be installed outside as long as it isn’t in direct sunlight, e.g. the north side of a home.

What does a solar energy storage system cost?

It really depends on numerous factors, but batteries are becoming more cost-competitive all the time. Contact us today for a quote on a solar/storage system. Or if you already have solar, we can price out the addition of a battery backup system.

It will be more cost-effective to install a battery backup system at the same time that you install your solar energy system, of course. But many consumers still choose to add batteries to existing solar energy systems after-the-fact.

Can I apply the 30% federal tax credit for solar to my solar energy storage system?

Yes! You can claim the Incentive Tax Credit (ITC) for the cost of the storage system as well as the cost of the solar energy system itself. Again, the ITC is 30% today, but drops to 26% on January 1, 2020. So today, the ITC essentially pays you back 30% of the price you paid for those systems, in the form of a tax credit. And if you already have a solar panel system installed, you can apply the ITC to a storage system installed later, as long as you charge the battery using solar (or renewable) energy.

The U.S. government offers guidance on which home storage systems qualify for the ITC in this fact sheet, Federal Tax Incentives for Energy Storage Systems.

(Please note: Citadel Roofing & Solar is not a tax advisor. Please consult your tax advisor to learn how the federal tax credit applies to you.) 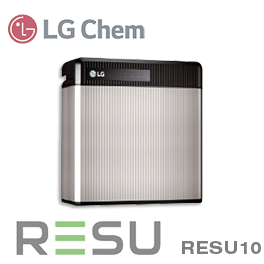 We chose LG as our first energy storage product in part because of the company’s long track record for reliable products. You probably know LG as the appliance and electronics manufacturer that has been serving customers since 1947. And they are the market leader for home battery products, which they back up with a 10-year warranty. The company has sold more than 170,000 RESU units worldwide, so it’s safe to say the product has been thoroughly tested in real-life situations!

Can you tell me more about Time of Use (TOU) rates?

In California today, any homeowner installing solar is switched to TOU rates by the utility company. This means your electricity rate fluctuates based on the time of day, with rates typically highest in the late afternoon when the “demand” for electricity is greatest.

While TOU rates may sound complicated, they can work to your advantage (and the planet’s) if you have both solar and storage systems. You can store some of your solar energy and then use it during peak times of the day instead of buying the utility’s expensive electricity. And this helps the environment too, by reducing your utility’s need to buy expensive, probably dirtier electricity from fossil-fueled power plants in order to meet the peak demand.

And if you’re using your own clean energy during peak demand times, you don’t have to postpone that load of clothes or dishes, or charging your electric car.

Click here for more on TOU rates, including links to each of the three big utilities’ Residential TOU rates.

And contact us today if you want to know more about solar energy storage systems. We install throughout all of California, with offices in Vacaville, Roseville, Valencia, and Davis.