Homebuilding contractors make a living by selling the American dream of home ownership. Government leaders in California have decided that the dream must include solar energy, with the passage of a mandate requiring solar on all new homes that went into effect on January 1, 2020.

Other states are weighing similar mandates to help reach renewable energy and climate change goals, so what is now a progressive initiative could likely become a mainstay of new home construction.

Forward-thinking homebuilders aren’t waiting for government mandates. They are already embracing renewable energy and energy-efficient products as options or even standard features in their new home developments. There is no time like the present to understand not only solar, but solar energy storage, and the opportunities both technologies offer your business.

With all California builders required to include solar energy panels on their homes, solar is no longer a differentiator for builders seeking a green advantage, whether “green” refers to environmental friendliness or electric bill savings. Solar energy storage systems, on the other hand, are encouraged but not required by California’s mandate.

Storage is set to become “the new solar” – a tool for builders who want to differentiate their communities and set their products apart from the competition.

California is well positioned to drive this developing energy storage market, given the technology’s rapidly increasing popularity due to frequent rolling blackouts implemented by utilities during wildfire season.

Solar energy storage systems, also called battery backup systems, vary in size.  One of the more popular systems measures roughly 30 inches by 36 inches by 8 inches. They are installed in a home’s garage or basement, or even outside. 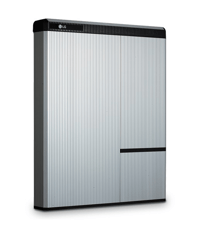 The main component is a lithium ion battery, the same type used in small electronics and electric cars. These systems allow homeowners to store their solar electricity for later use.

That translates into two benefits which are very compelling in markets with high electricity rates and/or vulnerability to power outages.

1. Cost Savings: A solar energy system alone saves homeowners a considerable amount on their monthly electric bills. If the cost of the solar system is rolled into a mortgage, then the solar on the roof is essentially “free” to the homebuyer. In another model, the homebuyer leases the system from a solar company and buys electricity at a much lower cost than what the utility offers.

Solar energy storage adds another dimension of savings. California solar owners are typically put onto Time-of-Use rates, which vary by hour and are highest in late afternoon or early evening. If their solar isn’t making energy because it’s raining or dark outside, homeowners can draw from their batteries instead of using the utility’s expensive power at these peak times.

2. Backup Power: Storage systems are also designed to provide some electricity to a home during a power outage. This benefit is causing storage to skyrocket in popularity thanks to California’s all-too-frequent rolling blackouts, implemented by the large utilities in an effort to prevent their equipment from sparking wildfires. Homeowners are increasingly joining businesses in installing storage systems that power some of their needs during these outages.

No one knows better than homebuilders how to position the dream of home ownership, and how various features and upgrades contribute to making that dream a reality. But how should builders incorporate storage into the dream?

The benefits of storage are clear: lower electric bills and emergency backup power. But how do those make the dream more attractive? By increasing energy independence and improving quality of life.

Consumers often can’t choose which utility delivers their electricity, but they can gain control in other ways. Solar with storage gives them a way to sidestep the utility’s expensive peak prices, freeing up money for other things. They are no longer at the mercy of utility outages—planned or unplanned—that interrupt their lives.

Having your own electricity during a power outage could prevent the loss of hundreds of dollars’ worth of refrigerated and frozen food. It allows people to run their home-based businesses and continue earning money. It even delivers critical safety benefits for those with medical equipment in the house, or those unable to open an electrically powered garage door manually. In short, with solar energy and solar energy storage, the homeowner is no longer solely reliant on the utility and its shareholder-driven decisions.

Energy storage increases the savings and independence attributes of solar energy. It also offers convenience, prevents losses, and enhances personal safety. How do you put a value on those things? You can’t. Just like you can’t put a value on quality of life or peace of mind, because they are priceless. Homebuilders that recognize that will be even better positioned to deliver the American dream in 2020 and beyond.

This article by Citadel Roofing & Solar Executive Vice President Aaron Nitzkin originally appeared in Builder on Dec. 19, 2019. It is reprinted here with permission.