If you’re having a new roof installed on your California home or business, chances are it will be a “cool roof”—a roof designed to reflect more sunlight and absorb less heat compared to a standard roof. California’s Energy Code (Title 24) requires virtually all new residential and commercial roofs in all sixteen of the state’s climate zones to be “cool”.

As with many environmental initiatives, cool roofs impact not only your home but also your community and the entire planet. It’s all connected, as we explain below.

Your roof is an ideal barrier against rain, wind and snow, keeping them out of your house. But it’s not a foolproof barrier against heat. Your roof absorbs heat from the sun and transfers much of it into your home, leaving you reaching for the air-conditioning many days of the year.

According to the U.S. Department of Energy (DOE), a standard roof can reach 150 degrees or more in the summer, whereas a cool roof would top out at around 100 degrees. California, of course, is only getting hotter, with more heat waves, droughts and wildfires—perhaps better classified as climate fires—predicted for the future.

The technology behind a cool roof is straightforward and proven. Either the roofing material is fabricated to have greater reflectivity, or it is coated or painted with a special material to increase its reflectivity.

The potential for cool roofs to help reduce global temperatures is impressive, as we explain below.

Cool Roof Benefits in Your Home

When your roof reflects more sunlight and absorbs less heat, less heat is transferred into your home. That means your home is cooler and more comfortable, so you use less air-conditioning. And that translates to less use of electricity including utility-produced power, much of which is fueled by fossil fuels like gas and oil. Those fossil fuels are widely recognized as climate change culprits. 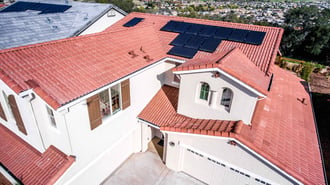 The ability of cool roofs to reduce the emissions of greenhouse gases produced by the burning of fossil fuels is particularly pronounced in California compared to many other states because of our consistently warm climate.

In addition to the environmental advantages of your cool roof, California homeowners and business owners benefit from the following:

Cool Roof Benefits in Your Community

The impact of cool roofs at the household level translates into these community-wide environmental benefits:

And cool roofs offer a bonus benefit for your neighborhood:

3.  Increased Grid Reliability: Less demand for air-conditioning lowers the overall demand on the electricity grid, which can help prevent
power outages in your area.

Cool roofs exemplify the wisdom of “think globally, act locally”. The use of cool roofs on individual homes has a collective, planet-wide impact:

When cool roofing products were first introduced, white was the only option. Today, an immense variety of colors are available for shingle, metal and tile cool roofs, and new options are introduced practically every week. Just look at the number of cool roof colors available from Boral and Eagle.

The cost of a cool roof is roughly the same as a standard roof because the addition of the reflective material represents only a small piece of the manufacturing cost. That’s true whether you’re building a new home or re-roofing your existing home.

The downsides to cool roofs are negligible. The color of your roof may not have the same pop or luster as a standard roof, but in most cases, today’s colors are extremely attractive.

And a cool roof may slightly increase a home’s heating costs in the winter because the roof is absorbing less heat. But that’s rarely an issue in California. Even in colder climates, CoolCalifornia.org says the additional heating cost is far outweighed by the cooling savings gained in the summer.

Much of the information in this article was gleaned from the U.S. Department of Energy, CoolCalifornia.org and the Cool Roof Rating Council. Here are links to their excellent cool roof resources, if you’d like to learn more about cool roof technology and its impact on our environment:

In addition, these related articles from Citadel’s blog may be of interest: