What’s in Your Solar Energy System?

Solar energy systems don’t get a lot of attention from homeowners and business owners after they’re installed. That’s because they’re so low maintenance and reliable that many people forget the panels are even there, or at least until they open their electric bill and are reminded how much money solar is saving them.

While the technology is simple and proven, there are a number of components to a residential or commercial solar energy system. Some of these pieces are already installed at your property and some are added when you go solar.

Here’s a rundown on the parts of a solar energy system. Plus, we explain the role of each component in the “magic” of solar, i.e. the conversion of sunlight into useable electricity for your home or business.

The process starts with the sun—that amazing ball of gases 93 million miles away that sends enough solar energy to the Earth in one hour to power humankind’s needs for a year.

Some of that immense amount of energy is captured by solar electric systems for our everyday use. 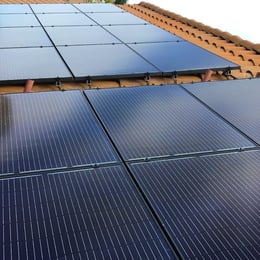 Solar photovoltaic (PV) panels of course are the signature element of a residential or commercial solar energy system. Each panel (also called a “module”) is made up of many solar cells covered by glass and often framed by aluminum. The cells are mainly made of silicon, the eighth most common element in the universe, which conducts electrical current.

When sunlight hits a solar panel, the cells absorb photons from the sun and convert them into electrons, which flow through the cell as electrical current. That current then flows from the cells to the inverters.

Inverters take the direct-current (DC) electricity produced by the solar cells and convert it into alternating-current (AC) electricity. AC and DC essentially represent two ways in which electricity moves from place to place.

Most of the electrical functions in an American home or business require AC power. Some require DC but you generally don’t need to worry about those. For example, your computer runs on DC power. That little box on the power cord between your laptop and the wall outlet converts the electricity from AC to DC for you.

To read the fascinating story of the battle between Thomas Edison and Nikola Tesla as they developed their DC and AC technologies, read this U.S. Department of Energy article.

After your solar electricity is converted from DC to AC, it flows into your property’s existing electrical panel. (Sometimes, electricians from solar companies like Citadel will upgrade your existing panel if needed to accommodate the solar.)

Residential electrical panels vary in size but generally range between 100 Amps and 400 Amps. Your electrical panel is typically mounted in your basement or garage, or on the outside of the property. It’s that gray box you head to when you trip a breaker because you ran too many appliances at once. But what does it actually do?

The solar electricity you make, just like the electricity from the utility, flows through your electrical panel and then into the circuits in your home or business.

If you’re making more solar power than you need to feed all your circuits, the extra flows from the electrical panel into the utility grid for use by others, or into your batteries if you have a solar energy storage system, where it stays until you choose to use it.

Did you know you can watch your solar energy system’s output online, in real-time? Your solar installation crew will install a piece of hardware called a gateway that allows your system to send data to an online monitoring application. You can log onto that app anytime to view your current or historical solar production.

Your house, office or warehouse already has a utility meter, which measures and displays how much electricity you draw from the utility’s grid. That measurement is the basis for your monthly electric bill amount.

After you have solar installed, you’ll need a utility meter capable of “net metering”. The utility will either activate your existing meter’s net metering capability remotely or, if you don’t have a digital “smart meter”, replace your regular meter with a smart meter. If your meter needs to be swapped out, Citadel Roofing & Solar coordinates that with the utility on your behalf.

To understand how a solar net meter works, it’s helpful to take a step back. When you have solar, you rely on both your own solar electricity and, when needed, the utility’s traditional electricity. When you’re making more solar than you need at any given time, the extra flows out of your home or business and into the utility grid for use by others (unless you have a solar energy storage system, in which case the extra is stored in your batteries).

At the end of the month, the utility charges you for any traditional electricity you took from them, minus credit for any solar electricity you sent into the grid for use by others.

Your net meter shows you your net usage, i.e. the difference between how much you took from the utility and how much you sent them.

You generally do not need to concern yourself with the AC Disconnect. If used at all, it’s usually by firefighters or utility line crews who will flip the switch as a safety measure during repair work or an emergency.

The professionals at Citadel know which jurisdictions require AC Disconnects and will include one in your system if needed.

A solar energy system has a few more components that aren’t glamorous but are critical to getting the job done right: roof mounts, racking and wiring.

Most residential and commercial installations on tile, membrane or shingle roofs start with the installation of roof mounts or brackets. The roof penetration at each roof mount is carefully weather-proofed with flashing and sealants. Racking—a system of rails—is attached to those roof mounts. The solar panels are then fastened to the racking.

A properly installed racking system is literally the foundation of your solar energy system.

(Standing-seam metal roofs do not require roof mounts as the rails are clamped directly to the standing seam.)

Equally important is the wiring that connects the panels and inverters to your electrical panel. After all, without those wires, your solar electricity wouldn’t end up where you need it (not to mention the safety hazard of electricity with nowhere to go!). The correct type of wire must be used for safety and maximum system performance.

To learn more about how not to install racking, wiring and panels, check out our blog post on Understanding Common Solar Installation Problems.